How can you properly preserve and protect fruit and vegetables while allowing them to breathe, too?

Unlike most food products, fresh fruit and vegetables continue to “breathe” after they are picked.
This process absorbs oxygen and releases carbon dioxide and water vapour.
The key to keeping these packaged products “fresh” is to reduce the rate at which they breathe, while preserving their quality (flavour, texture and appearance).

Quality risks for fruit and vegetables

In general, the rate at which they breathe can be reduced by keeping the temperature low or by creating a protective atmosphere, low in oxygen and high in carbon dioxide.
Unfortunately, it’s not quite that simple.

When the oxygen level inside the packaging drops too low, the product starts to undergo anaerobic respiration. This produces undesirable odours in the product and causes it to deteriorate. What’s more, an excess of carbon dioxide can also damage some types of product, or affect the taste by increasing the acidity.

In addition to these factors, the high water content in this type of food (and the acidity inherent in fruit) can lead to the products decomposing, with the appearance of moulds and yeasts.

The flesh can also go mushy under the influence of enzymes and microbes, which over time will allow the fruit to rot.

Ethylene acts as a “messenger” for fruit, triggering the cell ageing process and activating it in nearby fruit.  This will launch the ripening process, ending in the destruction of the fruit. The ethylene generation process can be halted by enriching the atmosphere with oxygen and blocking the fruit’s metabolism. When it reaches 80% oxygen, the fruit’s metabolism is halted. Then, all you need to do is return to a normal atmosphere (enriched with ethylene) to restart the process. This technique is used just before the fruit is placed on the shelf, while on a larger scale, ripening rooms with air conditioning systems are used.

Ethylene begins to have an effect on the fruit at a concentration of 400ppm.

Which packaging materials and techniques are recommended for fruit and vegetables?

The packaging material used for fruit and vegetables is particularly important, as is its permeability and breathability.
If products are hermetically sealed, there will not be enough oxygen and undesirable anaerobic conditions will develop.
On the other hand, if the material is open, the protective atmosphere will escape and will not benefit the product.
The goal is to reach a specific equilibrium in order to produce an Equilibrium Modified Atmosphere (EMA).

For example : For certain applications, such as endives, micro-perforated films are used to create defined threshold barrier between the atmospheres inside and outside of the pack.
This helps prevent colour change and damage to the leaves.

Here, oxygen and carbon dioxide can move in and out of the container so the oxygen consumed is replaced by oxygen from outside; the carbon dioxide level is maintained in the same way.
Another advantage of a modified atmosphere is that it helps prevent the natural production by the fruit or vegetable of a gas called ethylene, which accelerates the ripening process.

In a mixed salad leaf container, for example, a typical EMA would consist of 5% oxygen, 15% carbon dioxide and 80% nitrogen.

This could take the shelf life of the product up to 8 days, while (when exposed to the air) the normal shelf life would be no more than four or five.

A modified atmosphere can have a powerful effect on the browning of cut fruit and vegetables – potatoes and apples in particular – which is a form of oxidation caused by enzymes released when the flesh is damaged. Here, a blend of carbon dioxide and nitrogen in the packaging can delay browning for several days; without protection, this would occur in hours or even minutes. 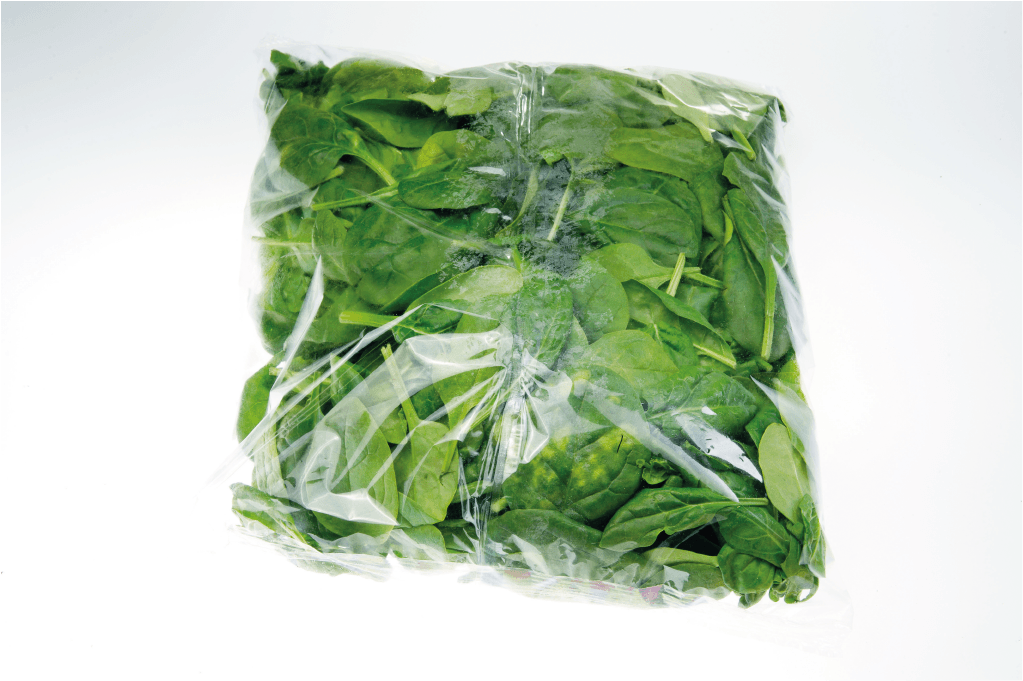 Which equipment is recommended to control packaging quality for fruit and vegetables?

Thanks to its capacity to analyse both the gas and the leakage on a sample, EXOS is particularly well-adapted to a field which uses several types of packaging with fresh products.
EXOS’s ability to give a leakage value is the ideal way to measure the breathability of micro-perforated films, as demonstrated by the APEF.